Year 6 pupils Rhys and Edie came up with a very creative and original idea to help raise money for the school IT campaign.

This features not only "Newsreader" Rhys and Edie as "News Reporter" but also one of Hollywood's biggest superstars, Tom Cruise!

The final few seconds of the video also feature the school as you've never seen it before, courtesy of Dan Roe who operated a drone above the school.

View the video below.

Rhys said "We really want to see the new White Boards in the classrooms before we leave Malorees in July. It was fun to make the video and maybe one day I'll be a newsreader!" 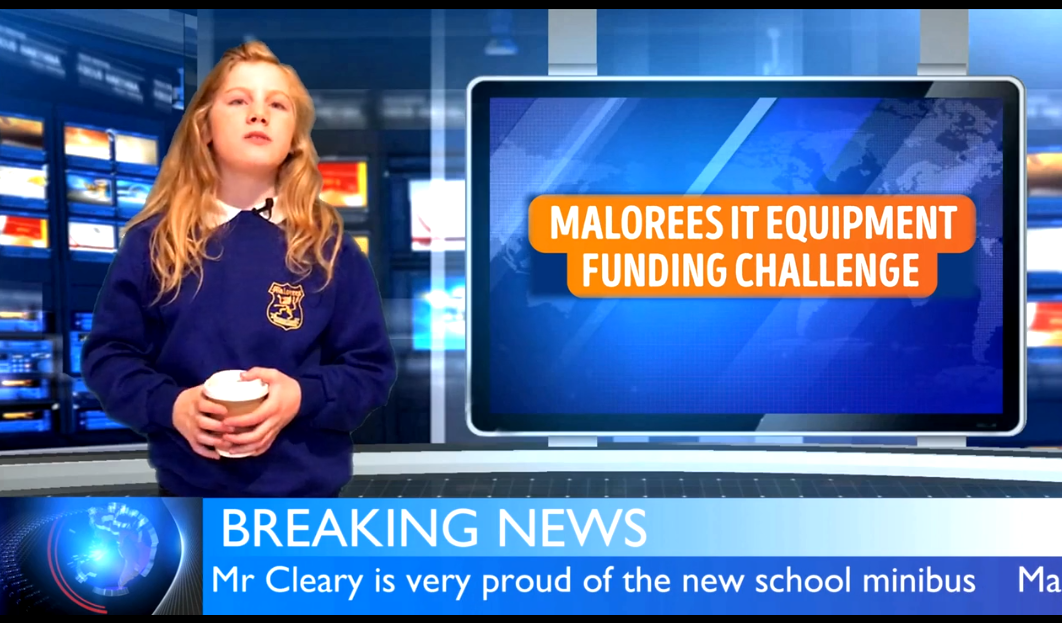 Edie said "It was a lot of fun making the video. The White Boards would make the lessons more interesting and make it easier for the teachers. All for the same price of a weekly 'posh' coffee!".

hool needs to be confident of raising £35,000 over the  next 12 months to be able to invest in eight White Boards, 15 laptops and a new projector for the school hall.

Thanks to parents' generosity to date we have raised enough to commit to the laptops and the projector.

Rather than expect parents to be able to commit large one-off sums, the PSFA would particularly welcome commitments to regular monthly giving.

Increasing the numbers signing-up would mean the school can agree a payment plan for the White Boards.

To find out more about the IT campaign please click here: bit.ly/maloreeswhiteboard.

If anyone signs up tor Monthly Regular Giving at bit.ly/maloreesmonthlygiving before 1 December they will receive 20 free Winter Bazaar raffle tickets.

As an additional bonus, our kind Winter Bazaar sponsor, The Property Lounge, will donate the £20 cost of these raffle tickets to the IT campaign!